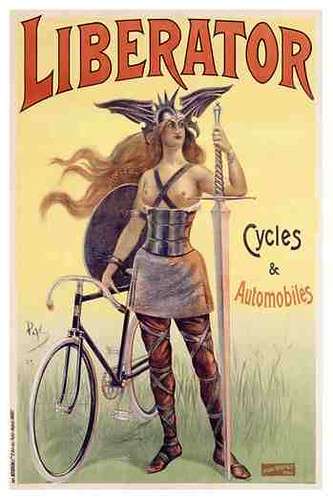 Excerpts from : Subjects of the Visual Arts: Bicycles by Carla Williams / Taisau

“Bicycles, introduced in Europe around 1863, were the first democratic means of transportation. In practical terms, bicycles eliminated the reliance on the horse and buggy.

The “Golden Age” of bicycles came in the 1890s and they were particularly fashionable in cosmopolitan cities such as New York, London, and Paris.”

“During this Golden Age campaigns were waged to encourage women to ride and, as a result, the bicycle became both a symbol and a means of women’s liberation.

With the new transportation came a “rational dress” movement for women, who could not reasonably be expected to ride in full skirts, wearing the average of thirty-seven pounds of clothing that was common before the advent of the cycle. As a result of the cycling craze bloomers in the 1880s at last became a viable fashion option for women, although feminists had pushed for years for their acceptance.

Another direct result of cycling’s popularity was a rise in female athletes–cycle riding had proved that exercise was not detrimental to women as was commonly believed. However, women cyclists were criticized for abandoning their femininity and becoming “mannish” or “manly women.”

In the United States, an image of singer Katie Lawrence appeared in men’s clothing on the sheet music for the 1892 popular song Daisy Bell, a love song to a cycling woman about a bicycle built for two. ”

“In France, Art Nouveau advertisements for bicycles often included nude or otherwise liberated women; one ad from around 1899 for Liberator Cycles depicted a bare-breasted helmeted Amazonian warrior alongside her wheels, while another from around 1895 for Cottereau Cycles showed a woman astride her cycle while breast-feeding.

In Staten Island, New York, lesbian photographer Alice Austen often pictured her bloomer-wearing women friends astride their bikes. In what would be some of her only commercial work, Austen made the illustrations for Violet Ward’s book Bicycling for Ladies (1896).”